Australia’s fuel security position is parlous to the extent of being an existential threat. We signed up to the International Energy Agency treaty in 1979 but we are the only country that is delinquent with respect to our obligations under that treaty to hold at least 90 days of imports as stocks. In November 2018, Australia had 53 days of stocks. The Federal Liberal government intends to get to its treaty obligation of 90 days in 2026, so it says. 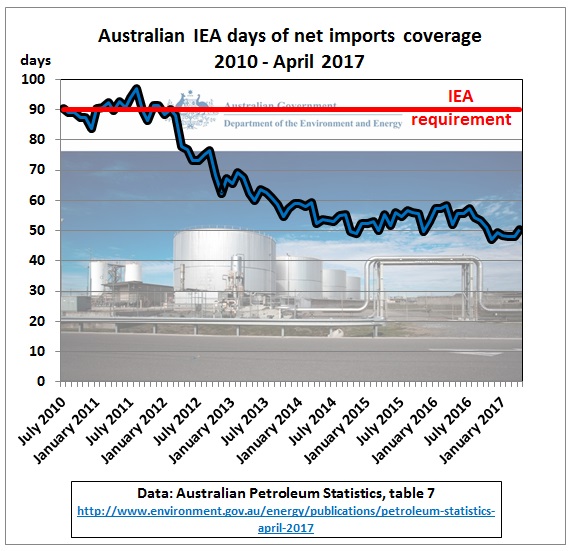 The Department of Environment and Energy is conducting a Liquid Fuel Security Review and in April this year issued an interim report. From that report:

We currently export most of our domestically produced oil, but, if we refined all the crude oil produced in Australia, this would still only meet 24 per cent of our total refined product demand.

There are other long-term threats to domestic infrastructure as a result of climate change. The ageing nature of Australian refineries mean that they may not be as effective when operating in higher average temperatures.

Even assuming that global warming was real, would an extra 1° make any difference to a distillation column with an operating temperature of 380°? I don’t think so.

The oil companies operating in Australia now run on a just-in-time basis with minimal stocks, with the consequence that there are fuel shortages from time to time. If one of those comes at harvest then the result would be damaging.

A war in Asia would result in the cessation of shipping to Australia. Australia owns very little shipping capacity for a very good reason -– Australian unions.  Shipping companies wouldn’t supply to Australia because they wouldn’t be able to get insurance, let alone what the crews thought of being torpedoed with a flammable cargo.

The country can be expected to out of fuel in a couple of weeks –- we have 25 days of refined stocks. People would start dying soon after, as the food and pharmaceutical distribution network stopped working. Our defence forces would be useless because they wouldn’t be able to move.

Back in the 1960s the country knew how important fuel security was so the Federal Government subsidised oil exploration in Australia. When the Bass Strait oilfields were discovered, they could not compete against Middle East crude at US$4.00/bbl so Australian motorists paid a premium in the petrol price so the Bass Strait oilfields could be developed. That paid off only a few years later during the oil embargo of the Yom Kippur War, when Australia sailed through that crisis unscathed.

Instead of encouraging Australian oil exploration, our current government is making it more difficult. Offshore oil exploration is now administered by an entity called NOPSEMA, which has 124 staff in the following categories:

There is need for the environmental officers, because there is a not a single instance of long term environmental damage done by an oil spill in Australia. The earth’s surface is just too oxidising for any oil molecule to last long. 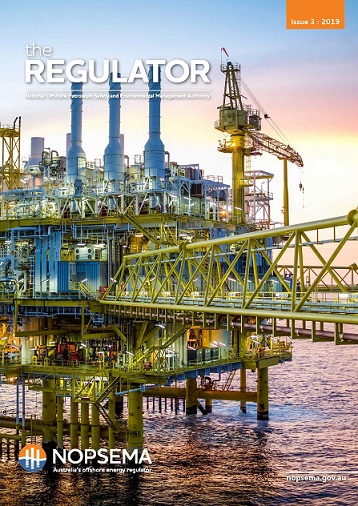 It is the well integrity engineers that did the most damage recently. A company called Cooper Energy was drilling a well called Annie-1 in the Otway Basin off Victoria. The rig broke a couple of anchor chains during a storm, which can happen with a deep water rig operating in shallow water. While off location, the rig decided to change out the drilling line. During that process the line broke and hit a deckhand in the shoulder. The injured worker didn’t want to be taken off the rig, so it was not a completely serious lost-time accident.

Nevertheless NOPSEMA decided to get involved and shut down operations on the rig until they inspected it. They didn’t come out to the rig for 10 days. Meanwhile the rig was costing Cooper Energy of the order of $1.0 million per day. When they resumed operations they missed a weather window for moving back on location to complete the well abandonment. In all, NOPSEMA’s action is thought to have cost Cooper Energy in the range of $12 to $15 million. Cooper Energy had planned to drill a well called Elanora-1 after Annie-1, but the cost overrun caused by NOPSEMA meant that they had run out of money to drill it. Elanora-1 is now scheduled for the 2021 drilling campaign.

When you have a major fuel security problem the last thing you want to do is discourage oil and gas exploration by acts of stupidity. All companies operating in oil exploration offshore Australia would be aware of what NOPSEMA did to Cooper Energy, and would be adding a 20% NOPSEMA-stupidity contingency to their well costs.

What can Australia do to improve its fuel security? The first thing is to copy the example of the US Navy, who are putting into two 8 million litre fuel tanks in Fuel Farm 7 at Darwin Airport. We need a lot more tankage than that, of course. Fifty days of consumption would be 8 billion litres and cost us at least $20 billion for the tankage and the fuel.

In a war we can’t rely upon the supply of oil and condensate from the arc of production facilities from the North West Shelf and points north. Chinese H-6 bombers taking off from their three new 10,000 foot runways in the Spratly Islands have the range to launch cruise missiles to take out platforms and floating facilities. With midair refuelling they could even range as far south as the distillation columns of the Kwinana refinery south of Perth.

The only abundant fuel that could be used in our transport fleet is natural gas. Cars and trucks could be altered to be dual fuel with compressed natural gas (CNG), supplied through the domestic gas reticulation system. Car and fleet buyers should be given a big price signal to move to the ability to use CNG.

Beyond that, we should bring the future forward and start making liquid fuels from coal on the scale of 5,000 to 20,000 barrels per day for each plant.

David Archibald is author of American Gripen: The Solution to the F-35 Nightmare