The BP Statistical Review of World Energy has oil production data by country up to the end of 2015. This is what that looks like from 1988:

Most oil producing countries are in well-established long term decline or plateau at best.  How these trends will interact can approached from a bottom-up basis. To that end, the following graphs show likely production profiles by region for the next five years.

Saudi Arabia used to be the world’s swing producer. That role has been taken by the shale drillers of the United States. The graphic assumes that enough shale wells are drilled each year to keep US production flat – profitless prosperity. Mexico’s decline is well established for geological reasons and Venezuela’s decline continues for political reasons. 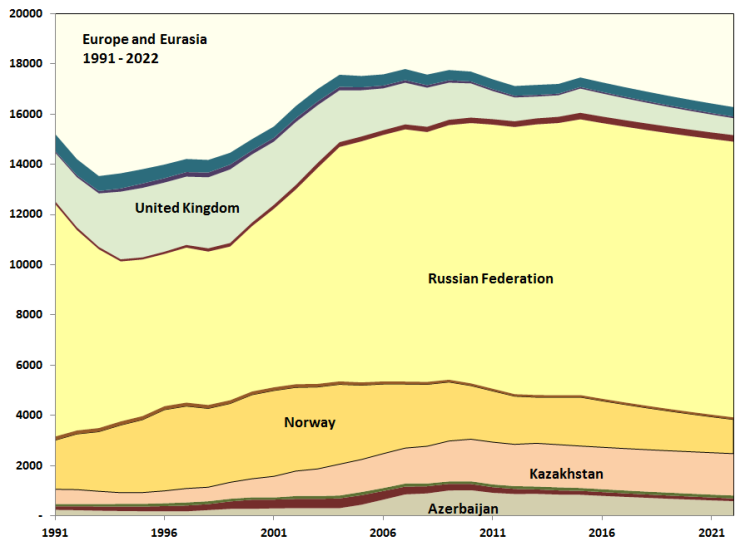 Algeria and Egypt are in decline. It is assumed that Libyan production does not recover from Tony Blair and Nicholas Sarkozy’s adventure in regime change.

Most oil producing countries in the Asia Pacific region are in well established decline. They were joined by China in 2016 which has two thirds of its production from giant oilfields that have been in production for decades and now have high water cuts and high operating costs. The graph assumes that China will contribute 1.3 million barrels per day of a 2.1 million barrel per day decline for the region over the next five years.

Adding all those production profiles results in production in 2022 that is five million barrels per day lower than world production, per BP’s statistics, in 2015.  That could be offset by a faster rise in Iraqi production combined with increased shale oil production. According to this graphic from BTU Analytics:

There are some 290,000 remaining shale oil well locations remaining in the United States. By Enno Peter’s work, about 62,000 shale wells have been drilled in the United States to date. Peak drilling year was 2014 with 14,262 wells drilled for 2.46 million barrels per day of production in January 2015. About half of that number of wells need to be drilled each year now to offset decline in US shale oil production.

From all of the above comes an unoriginal conclusion: US shale oil is likely to buffer the oil price for at least the next five years.

David Archibald is author of American Gripen: The Solution to the F-35 Nightmare