The response to the virus is not binary, or even ternary, but lies on a spectrum. By the standards of North America and most of Europe, neither Australia nor Sweden are in “lockdown” because most people go to work, there are no shelter-in-place orders, most shops and businesses are still open, and schools are open for those who want to attend. Both countries are up the relatively relaxed end of the virus response spectrum.

That people don’t go out much and are social distancing has nothing to do with government — we simply don’t want to catch the virus. Fear of the virus was always going to cripple some parts of the economy, as individuals make their choices.

Sweden is notable as the western country most relaxed about the virus. Restaurants are still open, and a ban on gatherings only kicks in at 50 people. Sweden was also notably slow to apply any government-mandated measures.

So how is it going? From figures up to today.

Australia: 6,625 confirmed cases and 71 deaths, in a population (including guests) of 27 million.

Australia and Sweden are following different strategies. Australia is crushing the curve: 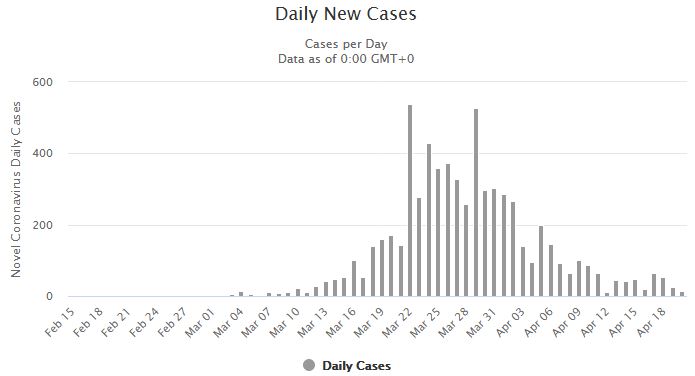 Australia is now ready to emerge from “lockdown”. The pandemic is almost over.

But Sweden merely flattened the curve:

Sweden’s new cases curve has leveled off — flattened — but is not  decreasing. It will keep on going. Even if they implemented full shelter-in-place measures today, it would take the usual 12 days before that shows up in the new cases curve. So Sweden has a lot more sickness ahead.

Even more important than the absolute numbers, look at the shapes of the graphs. Different trajectories are going to result in different destinations.

I predict Sweden will go for a harder lockdown before long, as the pointless health damage mounts.

Perhaps Australia got lucky because it is the end of summer here, so we are full of immunity-boosting vitamin D. Sweden’s light levels have been low for the winter months, so the vitamin D levels in Swedes are at their low point. Or maybe policy matters in a life-and-death situation. Or both.