Media, political elites who didn’t see Trump in 2016 are blowing it again with Bernie Sanders, by Will Bunch.

In Charlotte, N.C. — the city where President Trump will be crowned by the GOP for a second term in August amid boasts of a booming economy — a downtown auto dealer has begun letting homeless people sleep in his unsold cars. … Most of them are off the lot by 7:30 a.m. Why? Because most have jobs. These homeless people, including a number of young people starting their careers, simply can’t afford the rent in a booming Sunbelt metropolis. …

The sense of fundamental unfairness in this country — epitomized not just by the unhoused sleeping on car seats in a supposed “boomtown,” but also by staggering college debt, medical bankruptcies, and a lack of child care — is fueling a political revolution that has put Sanders on a White House trajectory. … 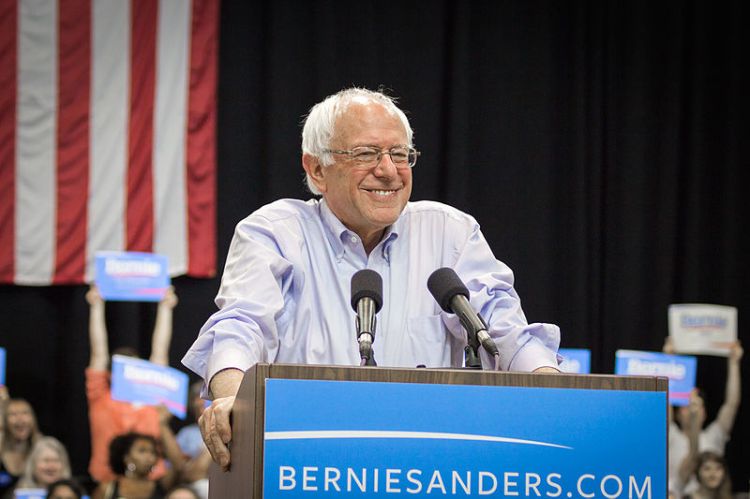 Bernie’s rise — and the everyday people fueling it, from college students to first-time Latinx voters to fed-up warehouse workers and Uber drivers — is a hell of story. It’s just not the story the elite mainstream media — the dominant cable outlets and national newspapers that are largely led by Baby Boomers (full disclosure: my own generation) and which employ the now aging veterans of their favorite campaigns as anchors and pundits — wants to tell.

To many of the TV talking heads — for whom the mere mention of any form of “socialism” makes them want to run underneath a desk and “duck and cover” from Khrushchev’s incoming nukes — the notion of Sanders as America’s 46th president is a bridge too far. …

As I watch the nascent “Never Bernie” movement flailing over a possible November choice between Bernie and The Donald, I have just one thought:

How, many journalists asked, did we not see the anger in so many Rust Belt communities in Wisconsin or Michigan or big chunks of Pennsylvania, with their barren factories and boarded-up Main Streets? Why, wondered people who spent so much time in TV “green rooms” that there was no time left to escape their coastal bubbles, do these aggrieved people hate us in the media even more than they love Trump?

The other heartland is making itself heard:

The weird thing about the “let’s-leave-the-green-room-and-visit-Trump-diners” movement is it just meant that going into 2020, there were now two bubbles instead of one. Neither were that helpful. Not to dismiss some very insightful journalism I’ve read in the last four years, the let’s-quote-Trump-voters genre often barely scratched the surface of the deep roots — from deindustrialization to fear of a nonwhite majority — of right-wing populism.

At the same time, many political pundits of the center-left and center assumed the Trump movement would be crushed in 2020 by the people they talked to on the checkout line at Whole Foods — well-off whites who hated the crudeness and corruption of the Trump era and desperately wanted a return to civility and order. Incredibly — or perhaps predictably, some would argue — there was no effort to talk to the forgotten Americans in “the other heartland.”

I’m talking about the big cities where there are lot of jobs if you can pay $2,000 a month for an apartment, the 20-somethings who may never get married because of college debt, the urban poor who get fired when their kid is sick because there’s no child care, the gig workers and the baristas with bachelor’s degrees living paycheck to paycheck. The kind of people who squeeze out a couple hours to attend a packed, sweaty Bernie rally because finally here is a leader who says he will fight for them, and who cares if he’s a 78-year-old dude with two stents?

The young and the marginalized (and their allies) who gave Bernie the most votes in Iowa and New Hampshire and Nevada don’t really care about his temperate praise for some social programs under Cuban communism… They’re not flustered by the math on Medicare for All. They take Bernie seriously, not literally.

These voters hear Bernie Sanders talking about how he’ll solve their real-world, 21st-century problems. Then they turn on their TV and hear the children of the Cold War screaming “How can this man be stopped?” It all makes you realize that the popular-for-15-minutes put-down — “OK Boomer” — was way too kind.

The elites who populate the highest levels of media punditry, run the Democratic Party, or get paid ridiculous sums to design nonworking apps or buy off Instagram meme-makers to pretend that Bloomberg is cool still don’t have time to talk to everyday voters about why they are so angry. … They are missing the real revolution — again! …

It’s also quite possible — likely, really — that the Beltway 500 will wake up on Nov. 4 insisting that they don’t recognize an America they never bothered to look for in the first place. Punch Sulzberger and Dean Baquet will begin drafting another apology about how Bernie’s “unconventionality” caused them to miss his appeal. Then we can all sit down in 2022 to read the 500th dispatch from a Fishtown coffee joint: “Bernie Voters Still Love Bernie.”

Will Obama endorse Bloomberg to stop Bernie? Hard to believe Bloomberg could make these ads if Obama disapproves of him:

Apparently this ad is paying big time in the US.