How China’s Xi Jinping destroyed religion and made himself God, by Steven Mosher, author of “Bully of Asia: Why China’s ‘Dream’ is the New Threat to World Order.” 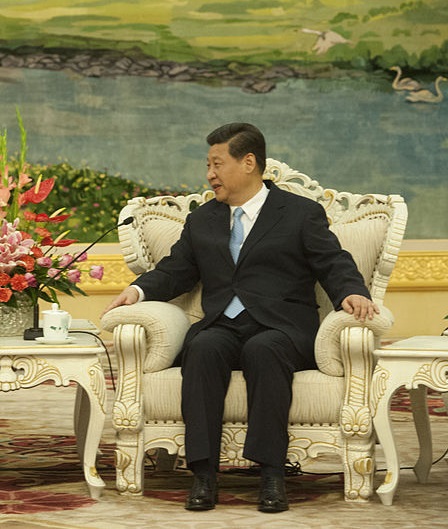 Little man in a big chair

Images of the Madonna and Child replaced with pictures of “People’s Leader” Xi Jinping. … The Ten Commandments painted over with quotes from Xi. … Over a million Muslims languish in concentration camps — Beijing cutely calls them “vocational training centers” — while mosques are being torn down, religious signs removed and ancient cemeteries leveled.

Elsewhere in China, Buddhist temples are being turned into shrines celebrating Xi Jinping, China’s President For Life. His picture adorns the walls, his recorded voice booms out of the loudspeakers, and it is his “Thought” — not Buddha’s — that the monks are now required to meditate upon.

Not even the Taoists, China’s ancient folk religion, have escaped this new Cultural Revolution. Temples that have stood for over 1,000 years have been closed and ancient statues smashed, all on the orders of “Religious Affairs” officials.

Perhaps some of those who are concerned about protecting cultural sites in Iran could spare a thought for the daily demolition derby now going on in China. …

A demolition derby that is about to get worse, a lot worse.

On Feb. 1, 2020, new restrictions on all forms of religious activity came into force.

The “Control Measures for Religious Groups,” as the 41 new rules are called, deal with everything from the holding of rites and rituals, to the selection of leaders and annual meetings, to the hiring of staff and the handling of funds. All of these must be reported — in advance, no less — to the comrades at the “Religious Affairs” office for their approval. …

The “Control Measures” are part of Xi Jinping’s New Cultural Revolution, one goal of which is to stamp out all religious groups that the Communist Party cannot co-opt and control. …

Any group that refuses to be subverted by the Party in this way will be declared heretical, and their churches or temples will be shuttered or torn down. Pastors or priests who refuse to serve the Party in this way — as junior political commissars, as it were — will be sent home or, if they resist, to prison. …

It is a policy of replacing the worship of God with the worship of the Communist Party leadership. Hitler and the Nazis attempted something similar in the 1930s with their Nazification program, which was an effort to turn the Catholic and Protestant churches of Germany into ardent supporters of National Socialism and the Nazi leadership.

That is exactly what the Chinese Communist Party is trying to do today in China to every Christian church, Islamic mosque, Taoist shrine and Buddhist temple in China.

The Communist Party of China is a jealous God. Like all those other authoritarian governments before it.

“Though shalt have no other source of meaning in life, except us.” Funny how a return towards that dim past is called “progressive” in some quarters.

The Chinese master race, by Lion of the Blogosphere.

It’s this viewpoint which explains why China is so outraged that they don’t control Taiwan. According to their way of thinking, as a racially Chinese majority country, Taiwan should naturally be under the control of the global Chinese government.

Unlike the Soviet Union, which prevented its citizens from leaving, China encourages it. They’re seeding the world with Chinese people, sort of like how white people colonized Africa. Today, white people feel very guilty about colonizing Africa, but the Chinese don’t feel any guilt about being Chinese. …

China is already imposing its dominance over Western countries. For example, major international corporations are self-censoring themselves at the direction of China. Probably, the next step will be China’s insistence that they put Chinese people in senior management positions if they want to keep doing business with China.