Why Trump will win again in 2020, by Victor Davis Hanson.

There is a growing wrath in the country, either ignored, suppressed or undetected by the partisan media. …

Each morning I try to ride a bike 15-18 miles out into the Michigan countryside. I have been doing that since 2004. Over the previous 12 years even this conservative rural Michigan county had showed no real excitement over George W. Bush, John McCain or Mitt Romney. But in 2016, Trump signs — both professionally made and hand-painted — had sprouted everywhere, on barns, lawns and sheds. Whatever Trumpism was, lots of southern Michiganders seemed ready for it. Six weeks ago, I rode the identical rural Michigan routes. Sometimes I stopped and talked to a few people. The script was almost predictable. After the requisite throat-clearing — ‘Trump should cut back on the tweeting,’ they said — they were even more eager to vote for him this time than last. …

One academic colleague used to caricature my observations in 2016 that Trump’s rallies were huge and rowdy, while Hillary’s seemed staged and somnolent — and that this disconnect might presage election-day turnouts. ‘Anecdotes!’ I was told. ‘Crowd size means as little as yard signs.’ If anything, Trump’s rallies now are larger, the lines longer. …

[At a Central Valley Rotary Club this week, compared to 2016.] There was an edge in their voices, an amplification of earlier fury at Hillary’s condescension and put-down of deplorables. ‘Anything he dishes out, they deserve,’ one man in a tailored suit remarked, channeling my grade-school friend Steve. I take it by that he meant he and his friends are frequently embarrassed by Trump’s crudity — but not nearly so much as they are enraged by the sanctimoniousness of an Adam Schiff or the smug ‘bombshell’ monotony of media anchors.

It is easy to say that 2020 seems to be replaying 2016, complete with the identical insularity of progressives, as if what should never have happened then certainly cannot now.

But this time around there is an even greater sense of anger and need for retribution especially among the most unlikely Trump supporters. It reflects a fed-up payback for three years of nonstop efforts to overthrow an elected president, anger at anti-Trump hysteria and weariness at being lectured.

A year is a proverbial long time. The economy could tank. The president might find himself trading missiles with Iran. At 73, a sleep-deprived, hamburger-munching Trump might discover his legendary stamina finally giving out.

Still, there is a growing wrath in the country, either ignored, suppressed or undetected by the partisan media. It is a desire for a reckoning with ‘them’. For lots of quiet, ordinary people, 2020 is shaping up as the get-even election — in ways that transcend even Trump himself.

A lot more people in the US than in 2016 now realize the essential truth of this, which Trump retweeted recently:

One danger is a stock market crash:

But impeachment? The Democrats, in their echo chamber of uniform opinions enforced by ostracism for disagreement, might have missed the mood:

Trump’s opponent? So far no opponent looks the goods: 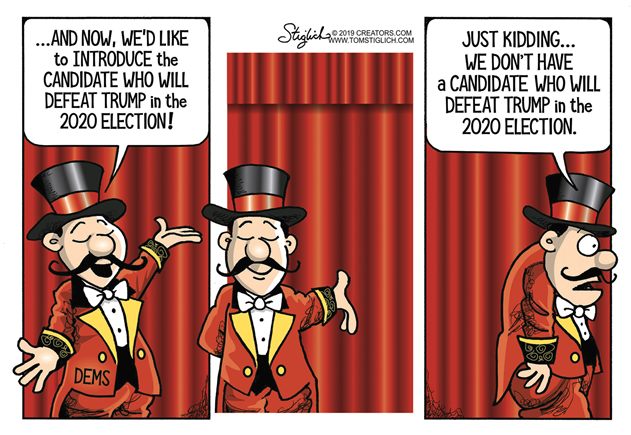 The contrast with what the last three years with Hillary Clinton would have been like? Hard to know …