When Donald Trump launched his 2016 presidential bid, he did so almost as an independent, openly disdainful of the Republican Party establishment, and enjoying little support within it.

When the House votes on impeachment Wednesday, Mr. Trump is likely to enjoy complete support from that same Republican Party, and will be dependent upon that support for his survival.

That represents one of the most remarkable transformations in modern American politics. More than that, it suggests that, while impeachment will be remembered for many things, one of the most important is how it may be completing the tribalization of politics in America.

In a sense, the politics of impeachment is the logical conclusion of the ideological, geographical and socio-economic sorting of the two major parties. Republicans in Congress now tend to represent more clearly conservative sectors of the country, which increasingly lie outside urban areas and in places where traditional cultural norms prevail. Democrats represent more clearly liberal areas, increasingly centered in coastal urban states that are more diverse and have shifting cultural values.

Those areas of the country have less in common than they used to, and the politics of those who represent them reflect that. They are expected to pull on their red or blue jerseys and go into the political arena to fight for their side, no questions asked. …

Are you for us, or against us?

Republicans have swallowed their misgivings about Mr. Trump and the pressure he put on the Ukrainian government because he now is captain of their team, and the team is what really matters. So they have swung behind him, knowing that there will be a steep price to pay with GOP voters back home unless they do so.

Similarly, Democrats face great peril if they utter any words of support for a president despised among their base voters. Some may have misgivings about impeachment, but the pressure from above and below them within the party is to swallow those misgivings and line up with the team in its charge that the president abused his power in pressuring Ukraine.

Polarization in the polls is higher than ever:

This process accounts for an almost complete division of views of Mr. Trump along party lines — a division far greater than any seen previously in modern American politics.

In the most recent Wall Street Journal/NBC News poll, 91% of self-identified Republicans said they approve of the job President Trump is doing, while just 6% of Democrats said they approve. That 85-point gap is 20 points wider than the gap seen at this point in the presidency of Barack Obama, who was considered a polarizing figure himself. By contrast, the same partisan gap at this point in Jimmy Carter’s presidency was a mere 16 percentage points.

At least it hasn’t broken out into civil war, yet. 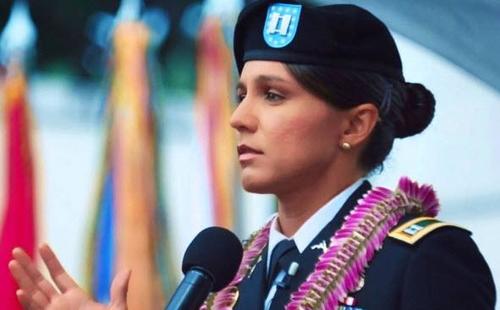 In a statement, Gabbard said that Trump is guilty of wrongdoing, but that she could not endorse a “purely partisan process.”

“When I cast my vote in support of the impeachment inquiry nearly three months ago, I said that in order to maintain the integrity of this solemn undertaking, it must not become a partisan endeavor,” said Gabbard. “Tragically, that’s what it has been.”

Gabbard characterized her actions as a “stand for the center”—a center that neither excuses Trump’s wrongdoing, nor supports his ousting mere months before a presidential election.