Britain’s divide isn’t North v South or red v blue. It’s between the ugly intolerant Left and the rest of us, by Douglas Murray.

The real chasm which has arisen is between a Conservative party that committed itself to fulfilling the will of the people, and two Left-wing parties which had devoted the past three-and-a-half years to subverting it.

The justification for lying: fake it ’til you make it. Perception is reality, so just own the media and tell ’em like you want it:

A perfect example of this was the self-proclaimed economist and full-time Corbyn-cheerleader Grace Blakeley, who treated viewers of ITV’s Good Morning Britain on Friday to the Corbyn-is-God mantra. Hours after her dear leader had led his party to an historic defeat she was on air, blindly insisting that Labour’s ‘democratically developed’ policies were ‘incredibly popular’.

‘People in this country are in favour of fairly radical Left-wing policies,’ she shouted. During the ensuing studio meltdown, Grace was, in fact, Grace-less, continuing to shout ‘Yes they are’ repeatedly over Piers Morgan and everyone else.

It demonstrated just one thing. There is a reason that people like Grace can’t accept that they have lost – they haven’t met people who don’t agree with them.

Or rather, when they do, it’s usually on social media where it is all too easy to ‘unfriend’ or ‘block’ them. When it comes to the British electorate as a whole, ignoring them completely becomes a far more difficult task.

But this is what has happened. In recent years a portion of the British Left, like Grace, very carefully built itself an echo chamber and then moved into it.

That chamber has allowed them to consistently disregard the views of the majority of the British public, most significantly the results of the referendum of 2016.

This small, London-centred clique has, in the process, pulled away from the rest of the country.

It is for that reason that the divides we used to say existed in British politics (North vs South, red vs blue) have been completely overtaken. Now, the divide is between the radical Left and everyone else.

The PC mob increasingly only believes its fantasies. It can no longer recognize reality.

Labour and the Liberal Democrats might, in the past, have accepted such a result [as the 2016 referendum], but for the first time in our history the cultists driving these parties decided otherwise. They chose not just to ignore it, but to insult the public by deriding them as thick or uninformed, and to try to get around them. … 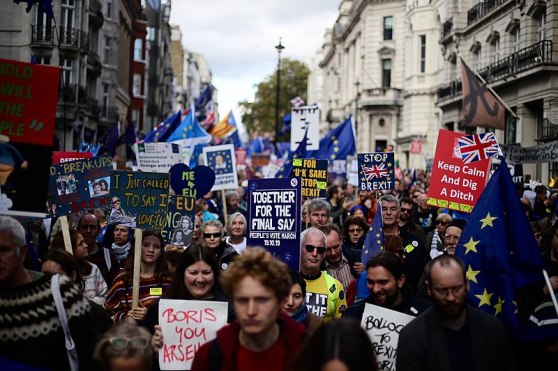 As it happens, I share the views of the majority of the country. I have seen the Leftist robots up close for years. I have sat in halls and studios with them and been insulted by them just as the rest of the general public have.

And amazingly, at the end of all that, I felt no more desire to vote for them than I had beforehand. I suspect the general public have the same view.

It’s like a child’s tantrum. You know the left have to give up eventually, but they sure seem determined to plow on at the moment.