The hidden male victims of domestic violence, by Augusto Zimmerman.

Take the example of John, whose wife constantly attacked him in the middle of the night when he was sleeping — punching him in the head and face. ‘I couldn’t do anything other than try and hold her off. It was very difficult, you are judged by people like the police as if you were the one who was causing everything’, he said.

Or consider Richard, the father of two who for 15 years was regularly beaten, isolated from his friends, and prevented from even owning a mobile phone. ‘You hear a lot about women needing help from violent male partners, but men also need help from violent women’, he said.

Jim, who has just turned 81, was forced to endure 60 years of controlling behaviour and physical abuse by his wife. He says: ‘It was progressive over the years. I couldn’t meet friends, I couldn’t meet family. The year before I left, it had deteriorated. I was getting black eyes, I was getting bruising, I got my tooth knocked out, I had my knee hammered and incidents like that’. …

Always blame the male, says the government and media:

Male victims often report that their complaints about their female partners’ violent behaviour have not being taken seriously by such social services which apparently believe that a man can never be a victim of domestic violence. Some have even been put at risk of further violence by such services contacting the abusing female partner and letting her know the man has sought help. There is even a sexist assumption that the male victim of violence may actually be the primary perpetrator.

To test the availability of such support services to male victims in Australia, a Melbourne-based psychiatrist rang the Victorian ‘Men’s Referral Service’. This is how he reported his experience: ‘I rang them one, two occasions in relation to male victims. Both times I was told that if I had dug deeper I would have discovered that the men were the perpetrators.’ This shows that these service providers are embracing the anti-male agenda of radical feminists. …

The NSW Liberal government has appointed a notorious feminist organisation to “assist” male victims of domestic violence. The organisation’s website informs: ‘The Men’s Referral Service provides free, anonymous, and confidential telephone counselling, information, and referrals to men to assist them to take action to stop using violent and controlling behaviour’. …

In other words, if you are a male victim don’t ask for help. 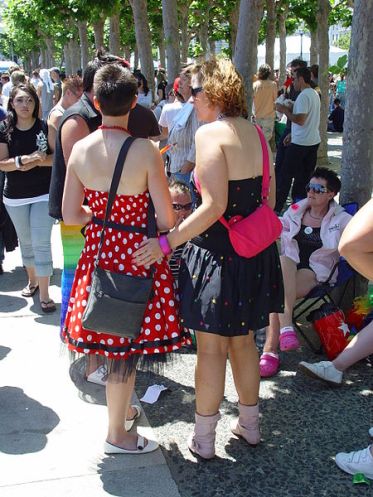 For those who still believe that women can never be the sole perpetrators of domestic violence, I would recommend an excellent book by Paul Kidd. It’s called ‘Australia’s Most Evil Women’.?According to this book, Australia has a higher percentage of female serial killers than anywhere in the world. ‘Of the thirty-two recognised cases of serial murder in modern times in Australia, nine of the killers were women — or around 33 per cent — with only two of those cases in tandem with a male’, the author says.

As Kidd points out, ‘women murder for a variety of reasons — the most common being the [alleged] slaying of a husband after years of abuse’. But he reminds us that only a small number of cases of murder would fit this particular category. These crimes were committed by women against their children and male partners that, according to the author, ‘could only be classified as pure evil, as no other reason has been found for why they did it’.

After all, Kidd asks rhetorically: ‘Who smothers four of her little children to death over a ten-year period and blames cot death? Who stabs her husband to death after sex and then skins his corpse, hangs the pelt in the doorway, then cooks his head in a pot and bakes his buttocks in the oven for the kids’ dinner?’

He must have deserved it, right? Just going with the propaganda… What’s truth got to do with it?

In truth, women can be as violent as men and numerous studies have demonstrated that both genders may commit violent acts in the home in roughly equal numbers has been clearly established in so many studies that it requires no reiteration. …

At least one-third of all the reported cases of domestic violence in Australia involve male victims. And countless more are silently suffering at the hands of their violent female partners.