We must resist foul Jeremy Corbyn and his anti-Semitic tinder, by Greg Sheridan. An unusually un-nuanced headline, but he does make some fair points.

The rise of Corbyn is a pointer to the gravely disordered state of political culture in the West. 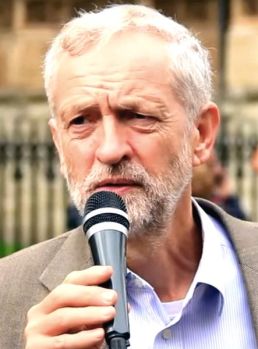 Before he became leader Corbyn was a figure of the extremist fringe. He undertook numerous paid appearances on Iranian and Russian television. On Iranian TV he denounced the BBC’s pro-Israel bias (yes, the BBC’s pro-Israel bias) evident in its reporting which indicated that Israel had a right to exist. He praised savagely anti-Semitic murals that depicted hook-nosed Jewish capitalists breaking the backs of the poor. He hailed as friends vicious terrorists dedic­ated to killing Jews.

As leader, Corbyn installed a hard-left cadre of trained and experienced far-left apparatchiks to run the party and its organs. And he attracted hundreds of thousands of young people.

Nothing is a more powerful indictment of the culture of youth activism than that it could fall for an extremist like Corbyn. An ideological attitude within the liberal arts that sees everything in the West as evil, that holds traditional political process in contempt and that acclaims ever greater intensity of outrage against the West’s sins, produces a generation, or at least a slice of a generation, for whom Corbyn is the natural leader. …

"Activism is a way for useless people to feel important, even if the consequences of their activism are counterproductive for those they claim to be helping and damaging to the fabric of society as a whole."

Anti-Semitism is the hatred of Jews. It is the most ancient, toxic, malign hatred humanity has come up with. I want to express solidarity with Jews and I don’t want my reflections to be depressing. But there is now in the world a kind of perfect storm of anti-Semitism that is fed from at least four distinct, powerful sources.

The Christian denominations have almost all apologised for their historic anti-Semitism, including fulsomely by Pope John Paul II… The far-right terrorists of synagogue shootings and mosque attacks sometimes draw on old Christian anti-Semitic caricatures in a parody of what they grotesquely think is a defence of the West. …

But the two most vigorous sources of contemporary anti-Semitism are the left and Islamists. …

Left-wing and Islamist anti-Semitism cross-fertilise a great deal, especially in the narrative that Jews are never victims. The corrosive, mad mixture of left-wing identity politics and traditional anti-Semitism is brilliantly referenced in Douglas Murray’s masterly The Madness of Crowds. He recounts an Atlantic magazine cover story that asked, in all seriousness, “Are Jews White?” This was so that it could be determined whether Jews were to be presumed guilty of enjoying “white privilege” and therefore always to be rendered as the enemy.

Beware the new left. They are gradually ramping up their anti-white racism to become the new antisemitism. Or, to put it another way, broadening antisemitism from Jewish whites to all whites. What level will it be whipped up to by the time whites are minorities in their “own” countries?

Note that Jews are perhaps the white subgroup with the highest average IQ. Likewise, whites are the group with the highest average IQs, with the exception of east Asians. Most prejudice has economic competition at its root. From the point of view of less able groups of people, feel the raw Darwinian power of demonizing and bumping off the group that out-competes them. Kill the oppressors!