Greens leader Richard Di ­Natale sparked fury from both major parties when he said the ­nation’s emissions policy had caused the fires that killed three people and injured 100. …

Senator Di Natale sparked the row on Monday when he said: “Every politician, lobbyist, pundit and journalist who has fought to block serious action on climate change bears responsibility for the increasing risk from a heating planet that is producing these deadly bushfires.” 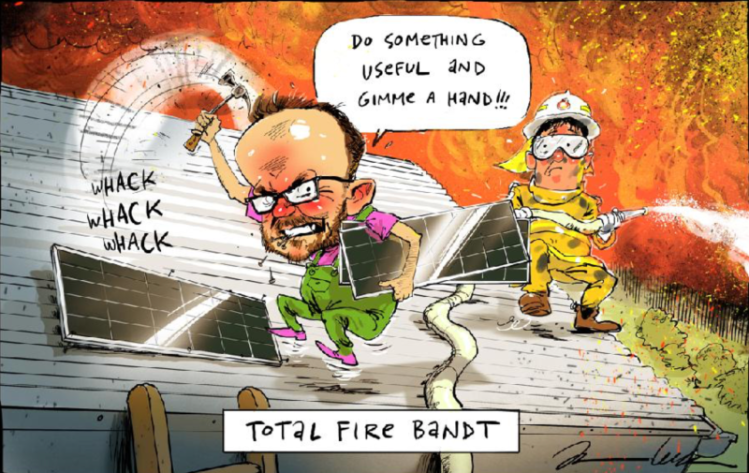 The Greens doth protest too much. See here.

Senior Nationals turned the ­attack back on the Greens, suggesting that environmental opposition to backburning, particularly in national parks, had exacerbated the bushfire threat.

NSW Deputy Premier John Barilaro criticised his state’s ­National Parks Service for contributing to the catastrophic threat facing the state by failing to carry out extensive backburning in the lead-up to bushfire season.

“We need to do more hazard ­reduction, (burning) in national parks to manage the fuel load,” Mr Barilaro told The Australian. “Everyone knows that this is a real issue and I’ve got the guts to say it.”

The Nationals leader said Australia had experienced bushfires since “time began” and he found it “galling” that people linked the ­catastrophe with climate change. …

“The responsibility of the build-up of surplus fuel must lay at the hands of state governments which do not allow seasonal burning based upon the traditions and customs of Australian traditional owners such as the Birri people,” Mr Dodd said.

“The problems we have got have been created by the Greens,” Mr Joyce told The Australian.

“We haven’t had the capacity to easily access (hazard) reduction burns because of all of the paperwork that is part of green policy.

“We don’t have access to dams because they have been decommissioned on national parks because of green policy. We have trees that have fallen over vehicles and block roads, so people cannot either get access to fight a fire or to get away from fires. And we can’t knock over the trees because of Greens policy.

Meanwhile, the ABC blames only climate change, in the worst propaganda I’ve ever seen from them. Joanne Nova, who watched the 7pm ABC News with me, comments:

But in every scene here, tree changers who never thought it would happen to them, were living with their $3000 bicycles in idyllic fire traps. How much were these folk misled by an ABC constantly reporting on climate change, and barely ever discussing fuel loads and almost never interviewing skeptics? Firefighters who recite the permitted “climate change” lines were put on a pedestal. Firefighters with data on fuel loads don’t get called.

And why was that ABC journalist wearing brand new fluro fighting gear to interview the victims?

All that good ganja country, ruined. Back burns not welcome.

A great way to live until the firestorm burns the soil, the microflora, macroflora, seeds, old growth, everything. It will take years to recover.