It may be time for helicopter money, by Alan Kohler.

In July 2012, Draghi set off a three-year, 50 per cent global stockmarket rally when he said: “The ECB is ready to do whatever it takes to preserve the euro. And believe me, it will be enough.”

In the seven years since, the ECB’s policy rate was zero for two years and negative for five, and much money was printed under the heading of quantitative easing, yet the European inflation rate has declined from 2 per cent to 1 per cent. Growth has fared no better.

Will Thursday’s package of measures do the trick? Unlikely. What got the Euro up a bit during the Draghi press conference was that it became another “whatever it takes” moment, except that this time it’s, in effect, “as long as it takes”.

But it’s all rather forlorn, as are the Reserve Bank of Australia’s efforts: after 14 rate cuts over eight years, the inflation rate here has declined from 3.3 to 1.6 per cent. GDP growth has fallen from 2.5 to 1.4 per cent.

It’s time, you would think, for central banks to stop messing about with the diminishing returns of rate cuts, and buying bonds from banks so that long-term interest rates decline even more than the cash rate, and doing something more direct — such as printing money and handing it out. 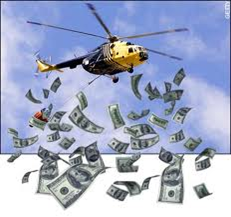 It’s called “helicopter money”, and is starting to gain traction in respectable circles, at least in Europe, but before getting into that, perhaps we should examine what’s wrong with 1 per cent real GDP growth and 1 per cent inflation. …

There are two problems with it, one practical, one theoretical.

The debt burden is way too high by historical standards. All debts are paid eventually, either by the borrower or the lender. With inflation the lender pays, but they might not catch on to how much until too late.

With global debt approaching US$250 trillion, more than three times global GDP, the only way this is going to be reduced without massive disruption and hardship is through inflation, and capitalism requires economic growth in order to work, because its foundation – investment – requires a return, and because the pie needs to grow if the inequality inherent in capitalism is not to cause social breakdown.

So independent central banks, concerned with more than their narrow mandates, are stolidly trying to get both growth and inflation up. Unhappily what they’ve been doing hasn’t worked.

The recipe for inflation that always works: print new money.

The other lever is labelled “helicopter money” and it’s not that different to the quantitative easing they have actually been doing, and RBA Governor Dr Lowe has started talking about (while adding that they’re not about to start doing it).

QE involves printing money and buying government bonds from banks to give them cash. Why not just give the cash straight to the government? Presumably because central bankers don’t trust politicians, although why they would trust bankers more is a mystery.

Anyway, fair enough, politicians are not to be trusted with printed money. They might get used to it, and take control of the printing presses by passing a law that ends central bank independence.

In that case, is the current suggestion gaining increasing support, just give the money directly to the people – deposit cash into everyone’s bank accounts.

German central banker at work, 1921. Loaf of bread, coming up!

As Moritz Kraemer, chief economic adviser of Acreditus, a risk consultancy headquartered in Dubai, wrote in a recent article, the central bank could “commit to making a monthly transfer to every euro-area citizen with a checking account, until inflation hits 2 per cent. It could apply a sliding scale, adjusted monthly, by paying €200 into every account if annual inflation stands at 1 per cent or below. This payment would be reduced by €20 for every 10 basis points beyond 1 per cent, reaching zero upon inflation hitting 2 per cent”.

Now that’s what you’d call unconventional monetary policy, but at least it would work.