Diversity, Inclusion and Anti-Excellence: A former dean of the Yale Law School sounds a warning. By Bret Stephens.

Today’s students are not chafing under some bow-tied patriarchal WASP dispensation. Instead, they are the beneficiaries of a system put in place by professors and administrators whose political views are almost uniformly left-wing and whose campus policies indulge nearly every progressive orthodoxy.
Sign up for David Leonhardt’s newsletter

David Leonhardt helps you make sense of the news — and offers reading suggestions from around the web — with commentary every weekday morning.

So why all the rage?

The answer lies in the title of Anthony Kronman’s necessary, humane and brave new book: “The Assault on American Excellence.” Kronman’s academic credentials are impeccable — he has taught at Yale for 40 years and spent a decade as dean of its law school — and his politics, so far as I can tell, are to the left of mine. 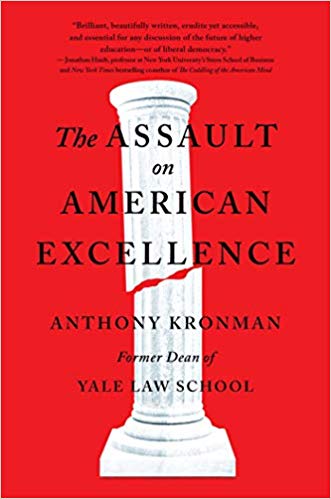 What’s happening on campuses today isn’t a reaction to Trump or some alleged systemic injustice, at least not really. Fundamentally, Kronman argues, it’s a reaction against this aristocratic spirit — of being, as H.L. Mencken wrote, “beyond responsibility to the general masses of men, and hence superior to both their degraded longings and their no less degraded aversions.”

It’s a revolt of the mediocre many against the excellent few. And it is being undertaken for the sake of a radical egalitarianism in which all are included, all are equal, all are special.

“In endless pronouncements of tiresome sweetness, the faculty and administrators of America’s colleges and universities today insist on the overriding importance of creating a culture of inclusion on campus,” Kronman writes.

“They stress the need to respect and honor the feelings of others, especially those belonging to traditionally disadvantaged groups, as an essential means to this end. In this way they give credence to the idea that feelings are trumps with a decisive authority of their own. That in turn emboldens their students to argue that their feelings are reason enough to keep certain speakers away. But this dissolves the community of conversation that the grown-ups on campus are charged to protect.” …

All this is meant to make students “safe.” In fact, it leaves them fatally exposed. It emboldens offense-takers, promotes doublethink, coddles ignorance. It gets in the way of the muscular exchange of honest views in the service of seeking truth. Above all, it deprives the young of the training for independent mindedness that schools like Yale are supposed to provide.

Civilization is retreating, in the face of a tide of mediocrity in all the wrong places.

Imagine running a team in the national football competition this way. It would lost every time, wouldn’t it? The left is turning the West from winners to losers.