Islam’s Crusade Against Free Speech in Australia, by Augusto Zimmermann.

Now that a religious discrimination bill is being proposed, there is a considerable risk that the Prime Minister might be contemplating the enactment of legislation to ban so-called ‘hate speech’ on the basis of severe criticism of a religion. As reported by the media, Scott Morrison has been urged by Islamic groups to extent to religious grounds the existing sanctions against those who offend people on the basis of race, gender, age, or disability. …

The ongoing push for laws that protect religionists from feeling “offended” comes primarily from Islamic groups. Grand Mufti Dr Ibrahim Abu Mohamed has called on the Prime Minister to push for new laws to extend greater protection to Muslims against so-called “Islamophobia”. He told SBS Arabic 24 that, as the country’s highest Islamic authority, he has personally asked the Prime Minister for laws that would make it illegal to strongly criticise Islam. …

At the same meeting Muslim Association Director Ahmad Malas went even further, calling on the government to stamp out what he evidently perceives to be Australia’s inherent “white supremacy”. As reported, Mr Malas demanded a review of all federal laws so as to address “the need for the Government to take responsibility at stamping out the ideology of white supremacy”.

Curiously, people who do not read Muslim primary sources would never know Mohammed is described in sacred texts as a “very white” person. Not only did the Prophet buy and sell dark-skinned slaves, but also took these slaves as spoils of war. The number of African slaves owned by Mohammed is estimated as high as seventy. Some of these dark-skinned slaves were women captured for sexual purposes and whose husbands were killed at war. Indeed, the two primary books of Islam, the Koran and Hadith, explicitly endorse unlimited sexual relations with female slaves, including women only just captured. In other words, raped.

Because Mohammed owned a remarkable number of slaves throughout his life, as did all his successors, slavery has been widely accepted throughout the Islamic world as an acceptable practice since the earliest days of the religion. In fact, leading Muslim scholars such as the celebrated Ahmad Baba authoritatively comment that the Islamic law fully authorises the enslavement of non-Muslims. 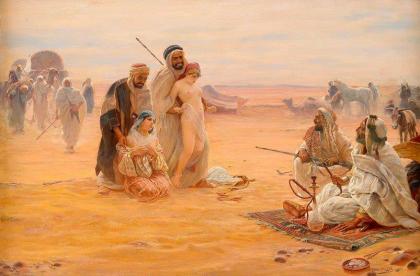 The Australian Government is being asked to make this beyond criticism

This has led to thirteen centuries of institutionalised slavery across the Islamic world. For instance, the trade in African slave trade has been an enterprise largely dominated by Muslim Arabs since the advent of the Islamic religion. Such a religious endorsement explains why slavery was abolished in Saudi Arabia only in 1962, although the institution continues in Libya, Mauritania, and Yemen, to name only a few. In today’s Libya, for example, ‘thousands of black Africans find themselves bought and sold, forced to work for nothing, and facing torture at the hands of their owners’.

One cannot hide the irony that, in their attempt to save themselves from offence, Muslim leaders have no qualms in offending the country’s majority ethnic group. ..

A recent statement by the Australian Muslim Community … promotes race-oriented accusations aimed at the majority white population in this country. It notoriously accuses white Australians of collective responsibility for the alleged “systematic massacre” of Aborigines. White people, as a general rule, concludes the statement, must be held collectively accountable for the promotion of so-called ‘white supremacist violence on this continent for over two centuries’.

This blatantly racist statement against Australia’s white population has been signed by approximately 450 Muslim leaders and organisations, including presidents past and present of the Islamic Council of Victoria. …

If the same rationale were applied to the countries of Northern Africa, even most of the countries in the Middle East, then all the Muslims living in these parts of the world should considered themselves to be guests on Christian land. The Egyptian Church, for example, was founded in the first century AD by St. Mark, the gospel writer. By the third century as much as 50 per cent of Egypt’s population was already Christian. … In 639, however, Caliph Umar initiated the Islamic invasion of Egypt. When Muslim forces finally succeeded in conquering Alexandria (then the second-largest city in Christendom), they engaged in widespread ‘massacre, plunder, and arson … until half the city was destroyed’. By the end of the fourteenth century, only tiny remnants of native Christianity survived, the once flowering faith having been almost entirely wiped out by Muslim persecution. …

Confusing religion and race for power and profit:

The Organisation of the Islamic Cooperation (OIC) introduced a couple of years ago at the United Nations a notorious motion imposing strict limits on free speech in the domain of religion, urging the UN Secretary General to convene a special session of the General Assembly to declare “Islamophobia” a form of discrimination akin to the crime of racism …

Of course, Islam is not a race and the problems related to such a religion are not the product of fear-mongering and fiction, but the result of ideology and empirical fact. Religion as a justification for violence is a theme heard frequently after acts of Islamist terror and mayhem. True, mainstream Muslim leaders shrink from such public commentary, but the firebrands who do are drawing their inspiration from the same holy books and the traditions of their religion. That those texts are capable of being interpreted at will and whim according to the individual’s priorities and perspective is a further illustration of why any law to limit examination and criticism of Islam would be the most egregious violation of free speech.