The Media Must Face Consequences for the Russia Hoax, by Adrew Syrios.

Many of the poor souls who fell for this farce hold out hope. Others who perpetuated continue to double down. Mother Jones, for example, says that despite Mueller’s findings, “ Trump and his gang betrayed the United States in the greatest scandal in American history.”…

Others are downplaying the results as if the Democrats, neocons and former intelligence officials weren’t yelling “treason, treason, treason” for years now. I’ll remind you that Time magazine had a frontpage cover of the Kremlin merging with the White House! 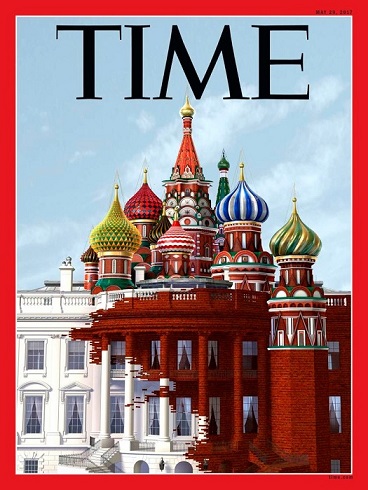 … Rachel Maddow [held] back tears as she briefed her audience on the report. Her fragile emotional state makes sense. After all, Maddow has dedicated virtually every show to the Russia hoax for the last two years ….

Somehow Maddow wasn’t the worst, though. Jonathan Chait argued that it was possible Trump had been a Russian asset since 1987! …

There is simply no way the first round of McCarthyism was ever this over-the-top and stupid. At least the first go of McCarthyism had some truth to the matter as the Venona Project showed there were plenty of Soviet spies implanted throughout the federal government at the time. …

Bill Maher stubbornly noted that “I don’t need the Mueller report to know Trump is a traitor.” …

With the exception of Tulsi Gabbard, every serious Democratic contender for President pushed the Russia hoax.

We should now remember that CNN was at the forefront of demanding that Alex Jones be censored off all social media for pushing conspiracy theories. …

On a related note, James Hodgkinson was radicalized by the mainstream press and noted “one of my favorite TV shows is ‘The Rachel Maddow Show’” before attempting to assassinate dozens of Republican senators and congressmen.

No collusion. It was just a Democrat hoax, to take attention away from their 2016 loss and the illegal dirty tricks of Obama:

And yet, here we are. Not a single American citizen has been convicted, let alone indicted for colluding with the Russians to steal the 2016 election. Not one.

That’s after over two years, millions of dollars spent, a Congressional investigation, a Senate investigation and a Special Counsel investigation initiated on dubious grounds of which 13 of its 18 prosecutors were registered Democrats. Mueller’s investigation itself issued 2800 subpoenas.

And yet, not one.

Instead we have a few Russian bot farms, a handful of process crimes, and some decade-old financial misdeeds.

The Media Industrial Complex will not give up. The story about probable Russia-Trump connection will continue.

The core of the matter is – What is Fake News?

There is no infallible arbiter of truth, so let’s have free speech.