The End of the World, by the Z-Blog.

To normal people, the Russian collusion stuff was always a nutty conspiracy theory. It seemed obvious that the point of the Russian collusion narrative was to distract people from the fact the Obama White House was engaged in activity that would have made Nixon blush. If there was a conspiracy, it was the media running cover for the crooks in the Obama administration.

This understanding blinded people to what could be the most important part of the Russian collusion story.

The Left really believed it. They really thought there was a secret conspiracy between Trump people and Putin people to work some secret magic to alter the 2016 election. They did not know the nature of this magic. In fact, it was probably supernatural, but the Left was sure it was real. This is something people outside the Progressive hive are just starting to realize. The Left really is that crazy. … 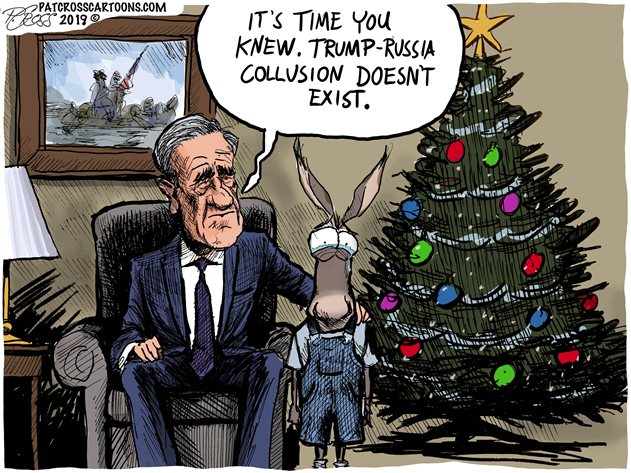 Cults have ways to deal with disconfirmation, but there must be a way to salvage some of the original core belief from the wreckage. If the aliens were supposed to arrive on Tuesday, but failed to show, the cult can explain this by claiming they got the dates wrong or that they failed to perform the proper ritual. In this case, the Left can’t seem to find a way to salvage the core belief from the wreckage, because the core belief had to be completely true in order to confirm their role in the Great Russian collusion narrative.