Tommy Robinson Turns the Tables on the BBC, by Bruce Bawer.

Tommy Robinson’s courageous truth-telling about Islam has not only resulted in years of harassment by the British authorities, an endless cascade of death threats, and, last year, a thoroughly unjust prison term that might have spelled his demise, but also, of course, a pattern of coverage by the mainstream media that has been almost uniformly deceitful and poisonous.

When he heard that the BBC series Panorama, which is the UK’s answer to 60 Minutes, was planning a story on him with the working title “Tommy Takedown,” and that its producers were collaborating with the vile group Hope Not Hate (HNH), which is Britain’s version of the Southern Poverty Law Center — i.e., a shady far-left smear machine masquerading as a noble monitor of bigots, fascists, and hate groups — he decided to go on the offensive. … 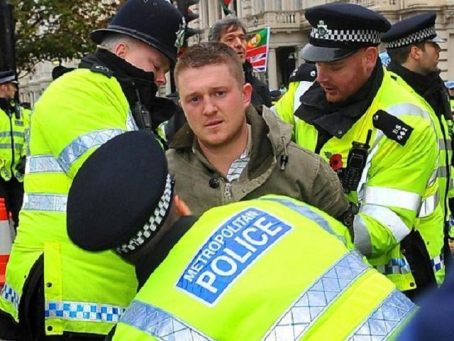 Tommy, whom [Panorama reporter John Sweeney] has been nagging for weeks to do an on-camera interview, agrees to sit down with him at a site of Tommy’s choosing — a room furnished, as it happens, with a big screen.

Before Sweeney can start asking questions, Tommy, who has brought his own cameraman along, sets about interrogating Sweeney. For instance, he asks Sweeney whether he’d ever tell any interviewee what to say about Tommy. No, Sweeney assures him. Tommy then directs Sweeney’s attention to the big screen, where Sweeney can be seen in [Lucy] Brown’s undercover video spelling out to her in some detail the three points about Tommy that he’d like her to make during their on-camera interview. If she covers those three points, Sweeney tells her, he guarantees they’ll be included in the final cut. Indeed, he pretty much writes her a script. Sweeney also asks Brown if there’s anything she doesn’t want him to ask her on-camera, and adds: “I’m not supposed to ask this.”

So it goes again and again: Tommy poses a question; Sweeney answers it with a firm no; Tommy then shows him an undercover clip that proves him a liar. ..

It showed BBC headliner John Sweeney up for the manipulative, dishonest operator that he is. …

“You’re fake news,” Tommy shouts at Sweeney. “You’re a classist, elitist … You’re a liar, you’re a fraud, you’re a racist, you’re a homophobe … You were trying to destroy my life!” The accusations are as true as can be, and the spectacle of Tommy hurling them directly, eloquently, and fearlessly into the face of this befuddled BBC boob is delicious — at once powerful and poignant, a textbook example of speaking truth to power.

Read it all, for the whole satisfying comeuppance.