The core of the immigration debate: Active citizens and passive citizens, by the Z Blog.

One side still thinks it is the duty of government to protect the borders and enforce the immigration laws. More important, they expect the government to put the general welfare of the American people ahead of the interests of foreigners. Sure, some immigration is fine, as long as they assimilate and become an asset. In other words, immigration is just another public policy and the right policy is the one that serves the interests of the citizens. 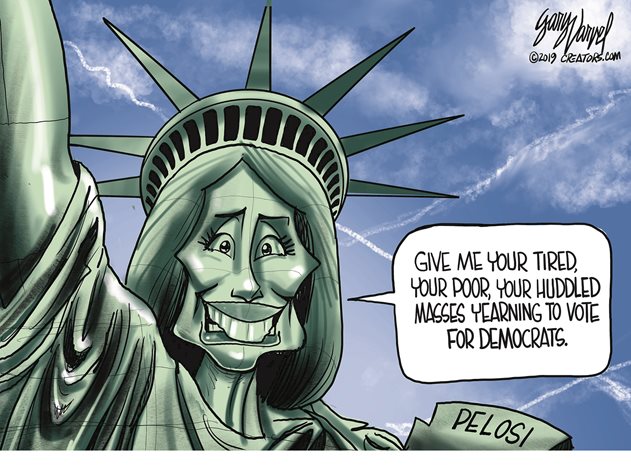 The other side thinks the only reason anyone wants to limit immigration is to protect losers who can’t compete with the newcomers. After all, only losers want the government to protect them from competition. David French calls it victim-politics. In other words, if you think the people in charge are not doing their duty to look out for the interests of their fellow citizens, you’re a crybaby and loser. …

In other words, … the ruling class can’t be bothered to do anything. In fact, they are offended by the very suggestion that they have a duty to the rest of us. Carlson is going through an advertiser boycott because he had the temerity to suggest that maybe the people in charge are not doing their duty. All the beautiful people are rushing to social media to defend billion dollar global corporations against a guy who says stuff on TV.

That’s why they are so offended by Trump and the surge in populism. They see it as a something like a slave revolt. It’s not the material inconvenience. It is the moral effrontery of the hoi polloi daring to question them. …

They are offended and probably bewildered as to why this is happening. They are so divorced from the rest of us, we may as well be space aliens or wild creatures living in the forest.

This is why reform is hopeless. It’s not that “the deep state” is secretly gaming the system to their advantage. There’s nothing secret here. The sorts of reform needed would have no material impact on our rulers. The reason reform is hopeless is they now define themselves in opposition to the rest of us. They no longer see themselves as our fellow citizens. Rather, they see us as a threat to their status as active citizens. Anything that blurs the lines between us and them, must be opposed, on principle.

They see us as “deplorables”. They define themselves as “not deplorable like us”, as superior in their own eyes. That’s the end result of all that moral vanity and virtue signalling.