Thousands of Australian school students have urged greater action on climate change in protests across the country.

The students skipped school on Friday to highlight what they say are inadequate climate policies by the Australian government.

On Monday, Australian PM Scott Morrison rebuked their plans for “activism” during school hours and insisted his government was tackling climate change.

Until of course it is proved to be lies, then it will never work again with that generation.

The lies of our generation were not as sweeping in scope and thus not as prone to causing anger when disproved. This generation will never trust government again as they sit in their badly insulated apartments with zero heating and pray for the sun to come out to give them some warmth.

You want the truth, clear and unvarnished?

Here is a recent graph with the only reliable temperature data we have — from satellites. Satellites cover almost the entire planet, they do not rely on thermometers in artificially warming locations, and past readings are not adjusted so as to exaggerate recent warming. 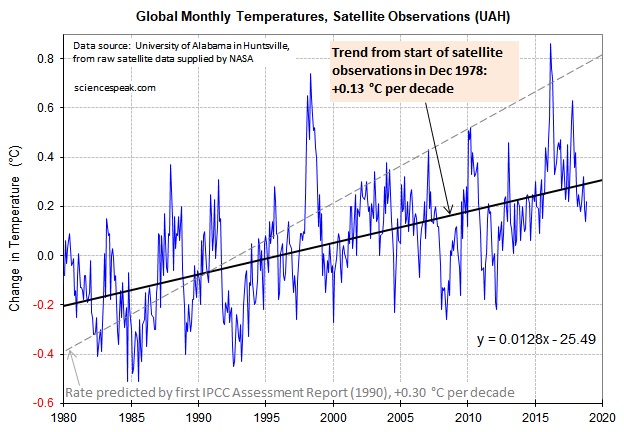 Can you spot a problem?

What if the temperature rise of the last three centuries (the coldest time in the last millennium was about 1680, and the trend has been up since then) was due to indirect solar forces, and is now pooping out and going into reverse?