Elizabeth Warren Was Celebrated as ‘First Woman of Color’ at Harvard Law, by John Nolte.

In 1993, the Harvard Crimson reported that the “Law School faculty voted yesterday to offer a tenured position to Visiting Professor of Law Elizabeth Warren.”

Warren began teaching at Harvard in 1995. Then…

In 1995, an article in the Harvard Crimson celebrated Warren as “Native American.”

Although the conventional wisdom among students and faculty is that the Law School faculty includes no minority women, Chmura said Professor of Law Elizabeth Warren is Native American. 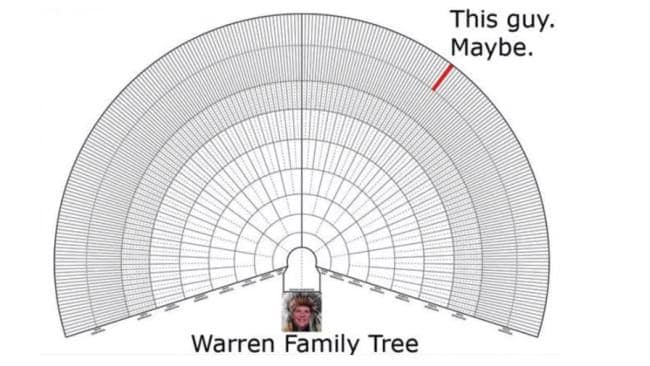 DNA test revealed she was between 1/64 and 1/1024 Native American, probably

The Boston Globe, a left-wing news outlet that basically works as a campaign surrogate for Warren, reported Monday that during “her academic career as a law professor, she had her ethnicity changed from white to Native American at the University of Pennsylvania Law School.”

Warren also did the same at “Harvard University Law School, where she was a tenured faculty member starting in 1995.”

On top of all that, back in 1984, Warren not only appeared to plagiarize a recipe for a cookbook titled Pow Wow Chow, she signed her name, “Elizabeth Warren — Cherokee.” …

A mere 13 years later, though, during her first run for the U.S. Senate, Warren claimed she had no idea she was being celebrated by her employers as the “first woman of color” or how in the world the school discovered she self-identified as “Native American.”

So here is Warren, between 1984 and 1995, parading around as a Native American, as a Cherokee, and doing so in the most public ways possible — in books and in school directories.

But in 2012, she says she has no idea how her employers discovered she identified as American Indian or that she was even being celebrated by Harvard as an all-important first in the Diversity Olympics. …

The Cherokee Nation disavows her.

Awesome. Identity politics at its worst. She exploited racism with a very dubious and tenuous claim to get into a good job at a prestigious university. Now she wants to be president — what a parasite!

Steve Sailer observes that Lindsey Graham is liberated from John McCain and loving it:

Lindsey Graham: 'I’ve been told my grandmother was part Cherokee Indian. It may all just be talk.' Now wants DNA test, just like Elizabeth Warren. 'I think I can beat her.' https://t.co/9c4OVjKPr5