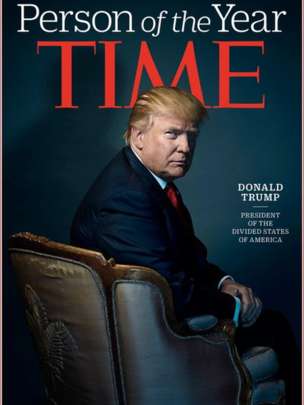 Note the fine print on the cover: “President of the Divided States of America”.

Had Hillary Clinton managed to win Pennsylvania, Wisconsin, and Michigan in the way that Trump did, there’s no doubt that Time would have bestowed this honor on her. Would they have subtitled her “President of the Divided States of America”? Almost certainly not, even though it would have applied just as well to Hillary; they would have probably used a “glass ceiling” reference instead.

More Trump derangement from the media.

Time magazine soon posted a gallery on their website of past covers that also appeared to give their subjects horns.

“Given the shape of the letter “m” in the magazine’s name and its location on the cover, many other subjects in the past have also appeared to sprout extra features,” the magazine stated.

Horns are probably a well-known phenomenon at Time, and they had a bit of a giggle by perfectly positioning big horns on Trump. Coincidence? Ha.